Israel acts because the world won't defend it

The scenes from Gaza are heartbreaking. But the whole conflict could be avoided if the Palestinians said one small thing

"Why, he asked, doesn't Israel offer to give back the West Bank and Gaza? Why doesn't it just let the Palestinians have a state there? If the Palestinians turned it down, he said, then at least liberal opinion would be on Israel's side and would rally to its assistance.

So I patiently explained to this kind, good man that Israel had, at Camp David in 2000, made precisely this offer and that it had been rejected out of hand by Yassir Arafat, not even used as the basis for negotiation. I told him that Israel was no longer in Gaza, having withdrawn unilaterally and taken the settlers with it. The Palestinians had greeted this movement with suicide bombs and rockets. Yet the teacher, with all his compassion, wasn't even aware of all this".

you can read the full article here

.
del.icio.us Tags: Palestinian_state,Gaza,Hamas,Israel
Posted by keith at 2:45 AM No comments: 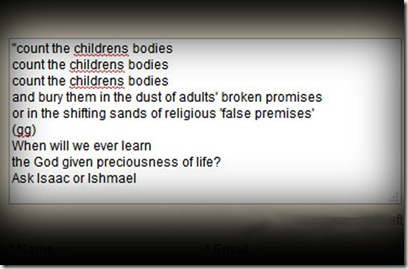 How can it be that once noble religions - having the same traceable genealogy - can still end up justifying the sacrifice of children?

Whether the story of Ibrahim and Ishmael, or Abraham and Isaac - depending upon your Middle East politics and tradition - the message of the story seems quite clear to any thinking,loving human being.

The One God does not require human sacrifice! Never did!

So,how do these kind of "justifications" relate to 'religion'?:

Mr Zahar made his first appearance since Israel launched its offensive. Dressed in a dark suit, he declared: “Victory is coming, God willing.”

I am not debating here the rights or wrongs of the political scenario in the Middle East.

What I am debating is the 'right' of any person to justify 'wrongs' in the One God's name.

With such inhuman absurdities some individuals claim 'religious authority', against a tradition that has stood for thousands of years.

Who needs a God that punishes - when humanity does such an inconceivably brilliant job of it?

.
del.icio.us Tags: Palestine.Jihad,Q'ran,Koran,Abraham,Ibrahim,Israel
Posted by keith at 2:59 AM No comments: