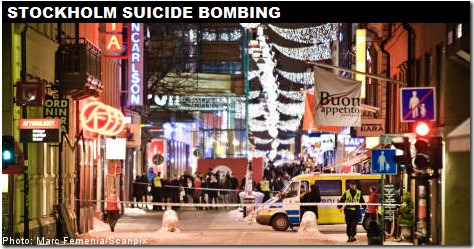 as horrified by this development as we are. It would be good to know how many

innocent Muslims were actually in Drottninggatan at or around that time.

The fact that a  so –called Jidadist website web-site claims the 'lone'(?) bomber was

acting on behalf of Al-Quaeda is simply that – a claim. It appears the man so far

with 2 children he nevertheless was to be found on the ' Muslima dating website'.

So, just to be sure we understand, the Q'ran expressly forbids the murder of innocents.

This was no more a religious act than climbing everest proves the world is flat.

The actions of an emotionally or psychologically disoriented individual do not

love, they have nothing to do with God.

A true religion – and it's leaders – finds ways to heal wounds and and not create more pain.