Mehdi Karroubi – "fire in the hold"

Readers of this blog will often note my lack of conciliation on the subject of politicised religion. I have a fundamentalist, simplistic view about this: when politics and religion mix, the innocent suffer and the 'religious org' clearly distances itself from concepts of higher morality, ethics and, yes, even it's own oft stated dogmas about the nature of God.

I have often bemoaned the absence of the 'voice of moderation and tolerance' in the Islamic world in the face of fundamentalist jihadist atrocities, often dismayed by the hijacking of a 'noble religion' by a fringe of power-hungry individuals. It is, therefore, with great respect and admiration that I read today of the continued principled stand of the 72 year old mid-level Iranian cleric, Mehdi Karroubi. 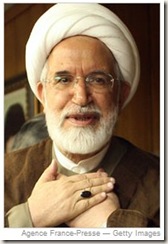 When threatened with an 'inquisition style' inquiry he stated “It will be a good opportunity for me to talk again about crimes that would make the shah look good,” More recently he stated “If only I were not alive and had not seen the day that in the Islamic republic, a citizen would come to me and complain that every variety of appalling and unnatural act would be done in unknown buildings and by less-known people: stripping people and making them face each other and subjecting them to vile insults and urinating in their faces,” he wrote in his letter to the nation. “I said to myself, ‘Where indeed have we arrived 30 years after the revolution?’ ”

I am not Muslim, but that does not stop me recognising the courage and determination of a man for whom his faith means more than his life.

The measure of the truth of Islam in Iran shall be seen in the manner in which this 'Islamic Revolution' handles the accusations of improper behaviour , human rights abuses, rape, sodomy, murder ,levelled against it by one of it's formerly highly respected own…