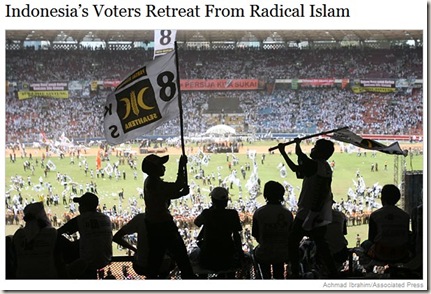 JAKARTA, Indonesia — From Pakistan to Gaza and Lebanon, militant Islamic movements have gained ground rapidly in recent years, fanning Western fears of a consolidation of radical Muslim governments. But here in the world’s most populous Muslim nation just the opposite is happening, with Islamic parties suffering a steep drop in popular support.

Altogether, the major Islamic parties suffered a drop in support from 38 percent in 2004 to less than 26 percent this year, according to the Indonesian Survey Institute

"An old man walking along the beach at dawn sees a young man picking up the star fish and throwing them out to sea. "Why are you doing that?" The old man inquired. The young man explained that the starfish had been stranded on the beech by a receding tide. And would soon die in the daytime sun. "But the beach goes on for miles," the old man said. "And there's so many! How can your effort make any difference?" The young man looked at the starfish in his hand and without hesitating threw it to safety in the sea. He looked up at the old man, smiled and said, "It will make a difference to that one."

A story told by Sen Edward Kennedy and re-told by Pres.Barack Obama. 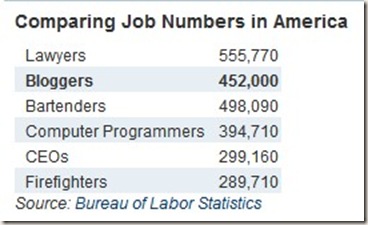 Did everyone think blogging was a ‘passing phase’, or just a hobby?

Let us also remember that today is HOLOCAUST Remembrance Day….lest we forget.

and just in case some readers object (?!?) to these two items being in the same posting, just check out what religious co-operation,tolerance and understanding really is about:

“Sweden has a law, in force since 2001, covering the practice of circumcision on boys up to 18-years-old. The procedure should normally be conducted with pain relievers by a doctor, nurse or private person holding a special licence from the health and welfare board.
Stockholm County Council does not currently offer the operation within the public healthcare system and parents are referred to private clinics where demand is high, reports Dagens Nyheter.
The newspaper reports that since the man lost his licence there are no longer any people within the Muslim community who are licensed to carry out the practice.
Many Muslims therefore approach Jewish practitioners to circumcise their male offspring.”